So, you have the great Campaign all set to go. You create the fort file with the editor, and everything looks awsum. You then create your english file and go to test the Campaign. But when you begin the mission, the text is not like you planned, or the graphics aren't there. What happened? Fear not, young MapMaker, examples are on their way...

HTML? I thought we were talking about Netstormoniam stuff? What gives, swelb? Well, the Netstorm programming staff created a way to format text which has some codes that are HTML, and other codes which are unique to the game Netstorm. Let's start with the basics: HTML codes.

Say you have this wonderful Scenario ready to go! You type the following:

Too many years of peace have made you soft! It's time for war!
$Button=Review Knowledge,ShowTechnology,55
$Button=Begin,DoNothing,0

Now, that's the way you want it: a title, then a quote underneath the title, a blank space, an opening intro line for your game, then a

button. But when you go to test out the Map, you see this:

What happened? Why did all the lines run together? Well, with HTML, and Netstorm's Editor, there are certain codes that tell the software when to add a line, when to begin a new paragraph, or when to change colors. These codes are called tags.

HTML tags are easily identified because they're always within < >. The most common text tags are: <br> which separates lines (line break), <p>  which begins a new paragraph, and  <h> which doubles the size of your text. Now, using our previous example, let's format it correctly. I also want the title to stand out, so I'm gonna double the size of it.

Notice a few things: the first <h> doubles the size of the text. Once text is doubled, it will stay double size until a </h> is encountered. So, in our example, only the top line will be double size.

Next, a <br> is inserted to tell the editor to start a new line. And after the quote, another <br> is added. Wait a second, why don't we need a <br> after the -Nimbian prophet line? Well, because the <p> on the next line can be thought of as <br><br>.

So, how's it look on the screen? Take a peek below: 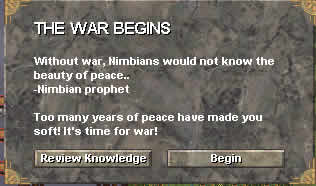 Nice, you're probably saying, but if you're like me, you're also probably thinking it's kinda dull. No colors. No graphics. Just plain white text. What else can we do with these tag-thingies? Let's see:

For text stuff, the ~ tag indicator uses 1 more character after it to indicate what to do with the text. Right now, we'll only concentrate on changing  font colors and styles.

If you're a regular visitor to these pages, then you've probably  seen the <a href="advanced_colors.html">Adding Color to Your Campaign (Changing_Text_Colors) Page section. If not, take a quick scan of it now, then come back to this page.

Got all that? Good, now let's continue. Let's spice up the colors a little. In the Title, let's have WAR in Black. Also, all quotes in Netstorm are usually that funky brown-white color. Let's do all of those things. Our code then becomes:

The ~k will make the text black, while the ~w resets the word color to white. Finally, the <i> makes the quote that quote-color. Remember to insert the </i> after the quote, so the color of the text will revert back to white. So far so good?

The screen should look like the picture below, once you start THE GREAT  SCENARIO: 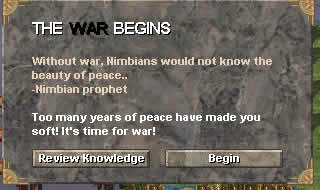 That's nice. But, it's missing something. The intro screen above is missing items to make it stand out. It's missing GRAPHIC IMAGES.

The Best (and hardest) for Last: Graphics

Now for the fun stuff: Graphics. Let's see how we can add a few images to our introduction. Images in Netstorm use the same funny tag ~ as colors do, but the image name must also be enclosed in brackets: [ ]. And because graphics in Netstorm are animated, you have to tell the Editor what Frame of the graphics you want.

Hmm... this sounds kinda complicated. And it is. So read carefully. And take notes. And sit up straight! And no talking in class! And...

Sorry, I thought I was back in school... Anyway, the syntax for formatting graphics is: ~[Iimagename.imageframe]. Imagename is one of a whole slew of graphic names for things in Netstorm. For a complete list of image names, and for a more involved explanation of images, check out the Images Imageframe is a number that defines what frame you want to display.

Look again carefully at the syntax above. See the I? Don't forget it when you go try this out on your machine. It tells the software that the stuff inside the brackets is the name of a graphic image.

Getting back to our example, I want to add a sun cannon image on one end of the title, and a rain cannon image on the other end. So, the ultimate sooper dooper intro code will look like this:

See the number 3 and the number 9 after the  image names above? Those numbers were chosen because I wanted to have the cannons pointing at each other. If I wanted them to point away, I'd use the numbers 2 and 4. How'd I come up with those numbers. Through trial and error.

The screen will look like this once the scenario is run: 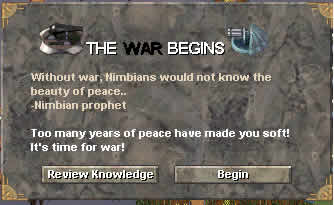 And that, fellow Nimbians, is the basics of formatting text and graphics.

Community content is available under CC-BY-SA unless otherwise noted.
Advertisement