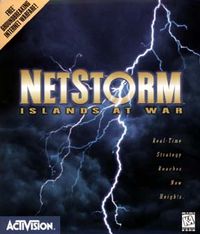 NetStorm: Islands At War is a real-time strategy PC game, developed by Titanic Entertainment and published by Activision in 1997. The game was intended mainly for online play, but also included a single-player campaign and tutorial missions. When players connected to an online server, games involving up to eight players were possible. Activision maintained the official servers for a number of years, until player numbers diminished and the servers were closed down on May 28, 2002.

NetStorm takes place in the world of Nimbus, a planet whose crust has been sent floating off in to the atmosphere by the never-ending battles between the three god-like beings called "The Furies", representing Wind, Rain and Thunder. The people now live on small floating islands, each with its own high priest; their only link to their patron Fury. The islands battle each other in order to capture and sacrifice the priests of their enemies to their own Fury so they may gain knowledge and power.

A demo of the game was originally released by Activision on September 15, 1997, but a flaw allowed users to convert it in to a full-version download. This in combination with the close launch date of the popular Age of Empires and lack of promotion by Activision meant game sales were poor.

In December of 1997, fans discovered an unsupported in-built editor function within the game that allowed new custom content single-player campaigns to be created. A fan-based community centred around playing the game and designing new content emerged based at a fansite named "Island Sanctuary".

Unfortunately, the game contained a number of bugs that many players exploited, including the ability to knock other players out of online games (called "nuking") and to give themselves unlimited credits within the game. On February 4, 1998 Activision released a patch fixing many of the problems.

Originally Activision had intended NetStorm to have a mass number of players and to that effect they had several global servers including numbering Israel , Australia , New Jersey , United Kingdom , and Activision's main server, which is the most used. Over the years, NetStorm's global servers began shutting down one after another as the hosts/ISP's realised ther was not the support for the game to warrant maintaining servers. Early on in 2002, players faced a troubled year with NetStorm. Activision's main server kept going down due to exploits abused by players, several attempts to fix it and a few months the server would be up for 2-4 days and then down again for over a month. On May 28th, 2002 Activision's customer support posted "The NetStorm servers have been taken down. There are no plans to reactivate these servers in the future." The main server of NetStorm was officially closed.

Two things happened then, one was NetStormHQ's History of Netstorm and the other was the Birth of NetStormWorld

The game play itself is relatively simple but quite innovative for its time, as few moving units are used, in contrast to other real-time strategy games, such as Command and Conquer. The battle area consists of a number of islands, each one controlled by an individual player. Each player has a priest unit which the enemy must capture and sacrifice using their own priest.

Players’ resources are increased by collecting power in the form of ‘Storm Crystals’, which can be used to build new units. The player starts the game with a limited number of units available; upon sacrificing an enemy priest the player gains more knowledge of new more powerful units for use in future battles.

There are several classes of units, including offensive units, defensive units and transport units. Only transport units can actually move and they are mainly used to collect the storm crystal from the “storm geysers” that appear randomly around the map.

Bridges are a key part of the game in that they are used to advance your position and gain access to other areas of the battlefield. Units can be constructed at the terminal points of the bridges and further bridges can then be built from the placed unit.

The ultimate objective is to use offensive units to immobilise the enemy priests by damaging them at which point they can be captured by a transport unit and taken to a sacrificial altar where they are sacrificed in exchange for knowledge of greater units. The game ends when all enemy priests are killed or players declare a draw. Throughout the game players are free to choose to ally with other players for mutual benefit, in which case a co-operative victory is possible.

Retrieved from "https://netstorm.fandom.com/wiki/The_NetStorm_History?oldid=3859"
Community content is available under CC-BY-SA unless otherwise noted.